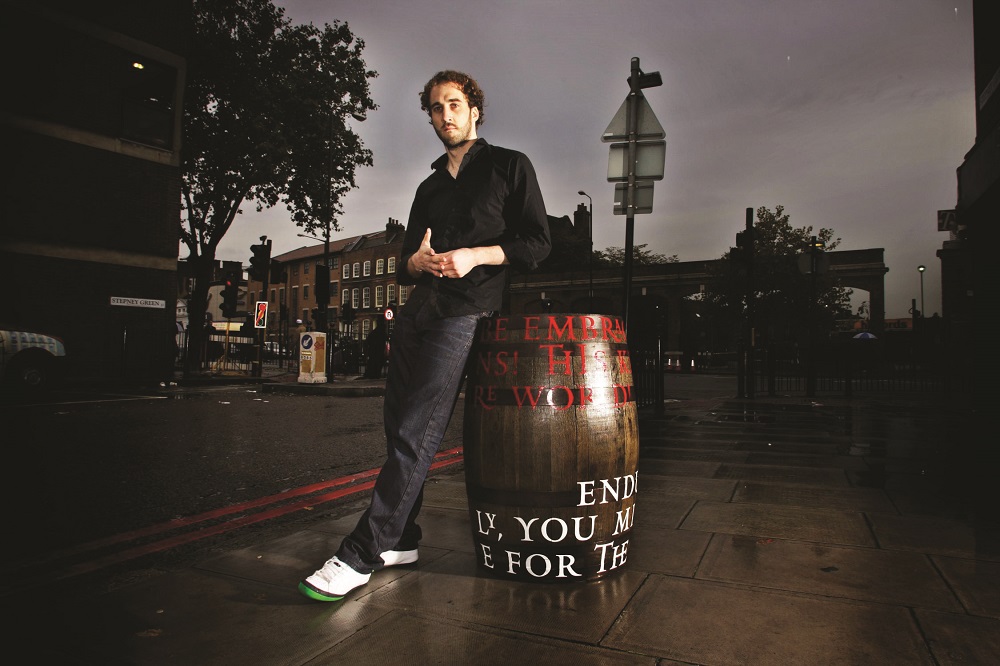 In this age of modern materials and technology the one place you won’t see anything changing is in the warehouse. Oak casks are needed for maturation and it’s this magical interaction between wood and spirit that gives us so many unique expressions.

Visitors to Speyside, the heartland of Scottish whisky, travelling the A941 road in winter could be forgiven for having to rub their eyes in near disbelief – especially if there’s been a heavy snowfall, which is a frequent occurrence in this part of the Highlands. Casual observers could swear that there are massive pyramids or Mayan temples on the hilltops alongside the road. But they are in fact the stacks of hundreds and thousands of wooden barrels belonging to Speyside cooperage and its many distillery clients.

Want to guess how big those stacks are?

Well, at last count it was estimated that there are 20 million barrels in circulation in the Scottish whisky industry alone… And since almost half of Scotland’s distilleries are located in Speyside, the cooperage at Criagellachie is well sited. Those stacks are made up of thousands of oak casks. Depending on who you listen to, it is estimated that between 50% and 70% of the flavour of whisky is attributable to its time in wood. So even if you’re not a fan of special finishes such as Madeira or Port, the barrel used for maturation has played a major role in influencing its eventual taste. Th ere’s a lot that goes into making a barrel. On the face of it, it all seems rather simple: take some staves, fit them together, bind them snugly with some iron hoops and Bob’s your proverbial uncle, right? Well there’s a lot more to it than that. Raising a barrel is an art and it takes four years to master the craft. Once qualified, a barrelmaker – or cooper – can consider himself rather special since he’s practicing one of the most ancient and important trades in history. With the advent of modern materials and transportation there’s less call for their skills as plastic containers or tankers are used to move liquids nowadays. There are precious few coopers around but there skills are still highly sought after in various circles – whisky and wine being the two most notable. 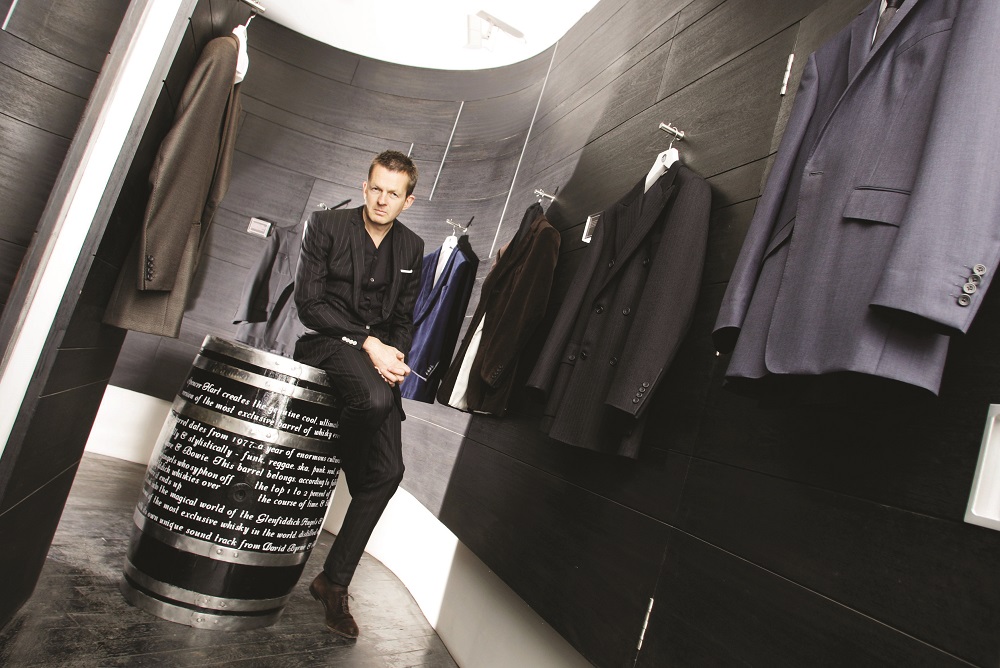 Bespoke style – Nick Hart oozes sartorial elegance. But then he is the founder of renowned Savile Row tailors, Spencer Hart. Among his exclusive client list Hart counts David Bowie and other style icons. His barrel – part of the Glenfiddich artist in residence programme – details the blending process 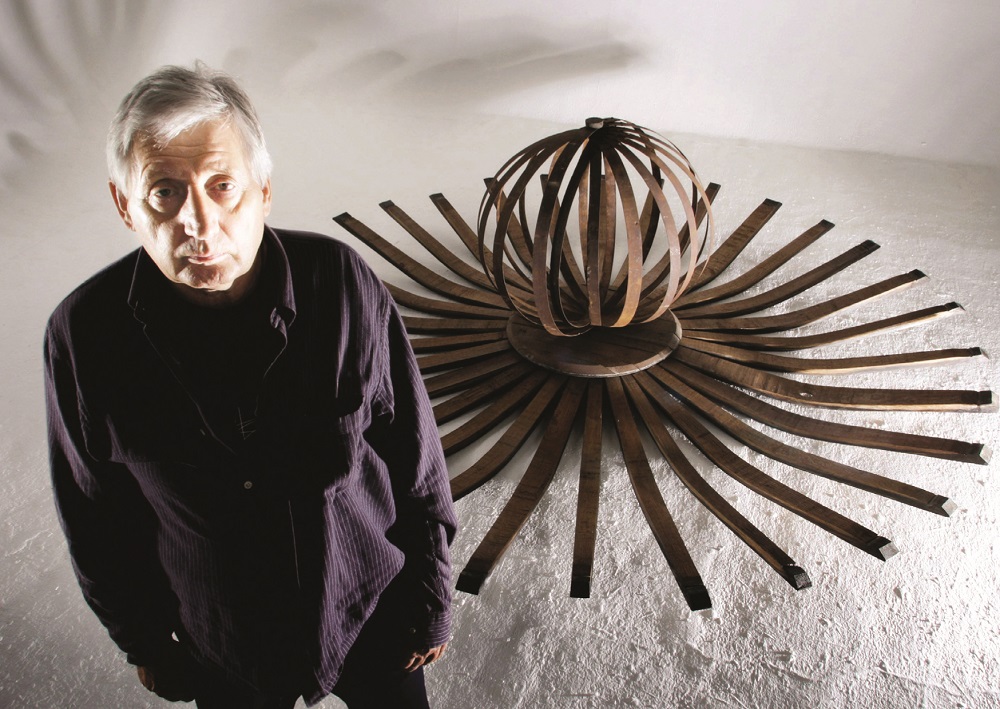 Below: Storm Thorgerson usually designs cover artwork for music albums and has worked with the likes of Pink Floyd, Led Zeppelin and Peter Gabriel. He turned a barrel into a lotus flower as a metaphor for the ageing of whisky – with each ‘petal’ representing a year of maturation.

Some of the earliest evidence of the cooper’s art can be found in the Egyptian tomb of Hesy-ra in Saqqara in Egypt that dates back to 2 690BCE. In fact, the name ‘cooper’ is from the Latin word for vessel – a cupa. Wine used to be stored in these wooden casks called cupas and the maker of such a vessel was called a cupanus.

The Speyside cooperage near Craigellachie is the largest in the world, outstripping many of the French cooperages. Until 2008 it was family-owned but the third generation of the Taylor family sold it to Tonnellerie Francois Frere. Managing director at the time, Douglas Taylor, said it was sold to the French firm because there were no family members interested in taking it on once he and his brother William retired. Taylor used to personally travel to Kentucky and Tennessee to select used Bourbon barrels.

Whisky writer Dave Broom, in his lecture on Bourbon during Whisky Live festival in Johannesburg made the point that the Scottish whisky industry owes the American coopers a huge debt of gratitude. Before Prohibition, the American whiskey makers used to do exactly as the Scots did – constantly reusing barrels time and again. But because so many distilleries shut up shop during Prohibition – and so few reopened for distillation afterwards the coopers soon realised that if this practice were followed there’d be little call for their skills. So the cooper’s union got together and decreed that barrels may only be used a single time in the making of Bourbon whiskey. The thrifty Scots rubbed their hands in glee because it also meant they had a constant source of virtually new barrels!

Oak trees – American white oak (Quercus alba) – is used. Trees of between 100 and 150 years are felled before being meticulously cut into wooden staves that are then air dried and seasoned for at least six months before they enter the cooperage.

Jack Daniels distillery in Lynchburg, Tennessee, takes delivery of 2000 barrels a day from the Brown Forman cooperage in Louisville, Kentucky.

The staves used for barrels vary in width, some are thicker than others and they are tapered at both ends to ensure the curvature of the cask. 31 individual staves are used to raise a barrel, alternating thicker and thinner pieces. Temporary iron hoops are put on them before they are steamed at 65˚C for 25 minutes. This makes the wood pliable and ensures that the staves fit snugly together.

The barrels are then toasted which heats up the wood, bringing the naturally occurring sugars to the surface which is necessary since it will eventually interact with the newly distilled spirit, ensuring that it not only adds a vanilla, caramel and butterscotch note to the Bourbon and whisky but also alters the colour of the white spirit to its distinctive russet golden hue. In the Brown Forman cooperage the barrels are pneumatically squeezed to ensure the tightness of the stave seal before they go for charring, when the barrel is literally fired to promote blackening and blistering of the interior. There’s a distinctive crocodile skin formation which results. Finally, the heads are added, temporary hoops discarded and the ultimate metal rings fitted and snugged tight before the bung hole is drilled in the centre of the barrel. 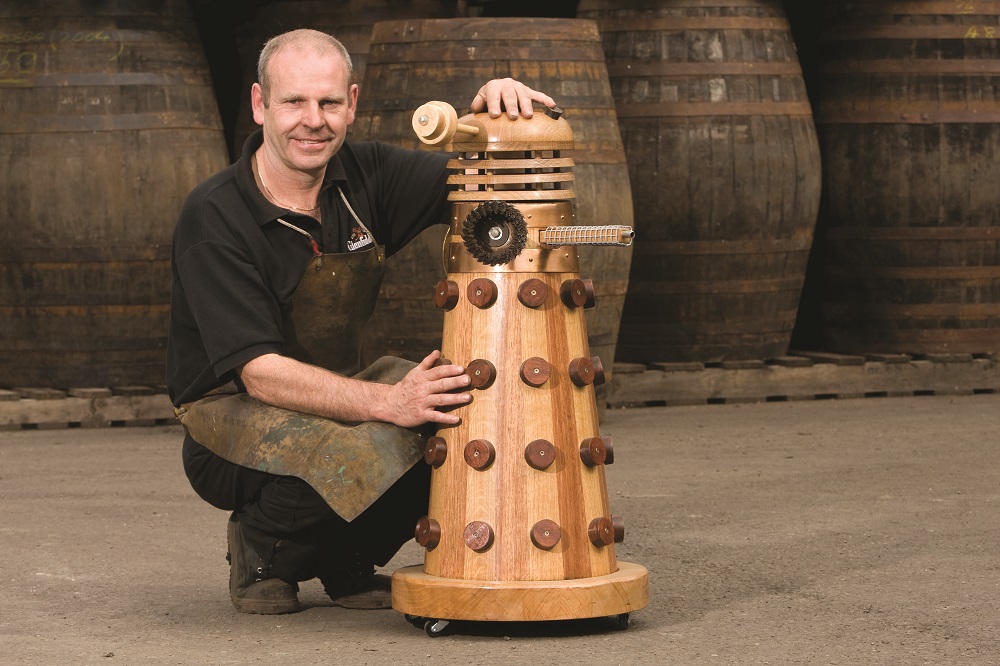 Proving that even coopers can be creative, Ian McDonald created a mini Dalek. Fans of long-running British sci-fi series Dr Who will recognise it, albeit in oaken disguise. 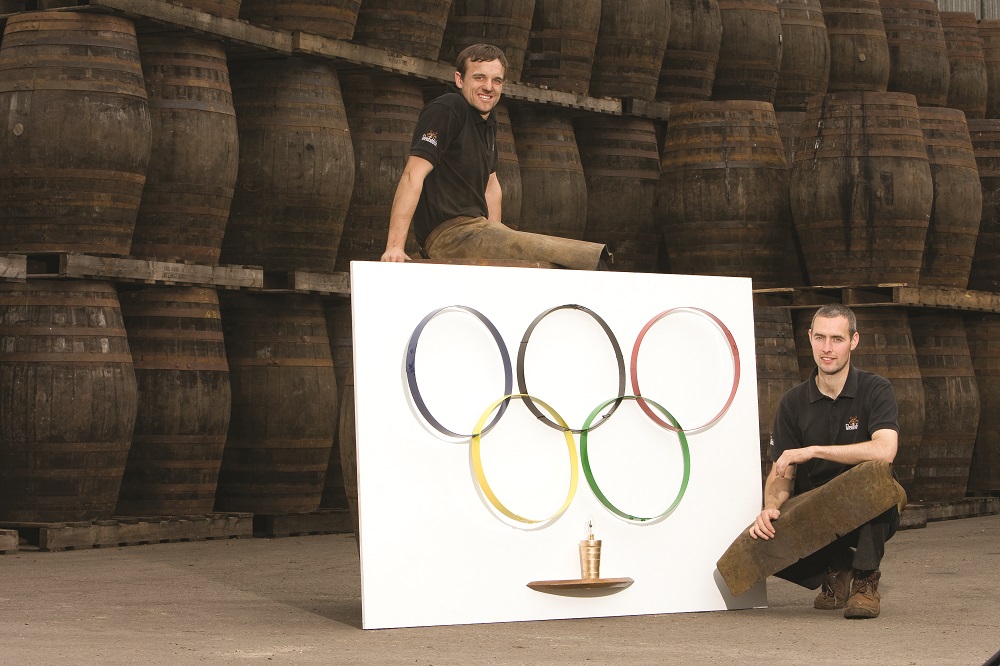 Below: Later this year athletes will be sprinting and jumping in the 2012 Olympics in London – just not through these hoops. Glenfiddich coopers Richard Anderson and Lawrence Proctor reconstituted a few of the barrel hoops to recreate the fabled Olympic rings.

A test with water and high pressure hose ensures that the seal is watertight.

At Speyside cooperage microwave technology is used rather than steam. It’s faster and more efficient. The 10 Scottish coopers, along with three others undergoing their four year apprenticeships, will recondition and raise 100 000 barrels a year between them. At his peak, a skilled cooper can make between 15 and 25 barrels a day.

And in typical Scottish fashion there’s a “waste not, want not” principle in operation. Almost all the oak shavings and chips are recycled. Visitors to the gift shop can buy all manner of oak gifts – half barrels for planters, dog kennels out of old staves, garden furniture, letter boxes and even shavings for the enthusiastic home cook to use for smoking fish and meat on the barbecue!

A manual cooperage is a noisy place. There’s the constant bang of tool and mallets on wood. One of the most interesting elements is that of personal expression. When tapping down the iron hoops, it’s possible to distinguish which cooper is active because each one has his own unique rhythm and ‘tune’.

The names of the tools themselves have a medieval ring to them: stave plane, crumb knife, skillop, chiv plane, croze, adze and scribing tool… (A skillop, by the way, is used to increase the size of the bung hole.)

Jeff Arnett, master distiller of Jack Daniels, the source of a vast number of barrels in circulation in Scotland, said it was in the warehouses of Kentucky, Tennessee,

Scotland, Ireland and elsewhere that the magic happened.

The fluctuation in temperature during the seasons, meant that the barrel and spirit interacted and a certain amount of the spirit evaporated through the pores of the wood. The angel’s share can account for up to 30% of the volume within a cask, depending on the length of time of its maturation.

Timing is also key. Not enough time and the whisky will be quite spirituous while too long and it can become bitter and harsh. For some products five years is sufficient, others need 10 or 12 years to find their best expression while still others handle 18 years with ease.

And the Scots, of course, reuse the barrels a few times – which means they’re returned to Speyside cooperage for reconditioning, a bit of a shave and a trim, a retoast and they’re back in business.

Which explains the huge stacks of barrels, altering the shape of the Speyside hillsides