Stellenbosch, February 8 – Master Distiller Andy Watts walked away with a coveted World Whisky Brand Ambassador of the Year award at the Icons of Whisky Awards in London, United Kingdom, on Wednesday night. 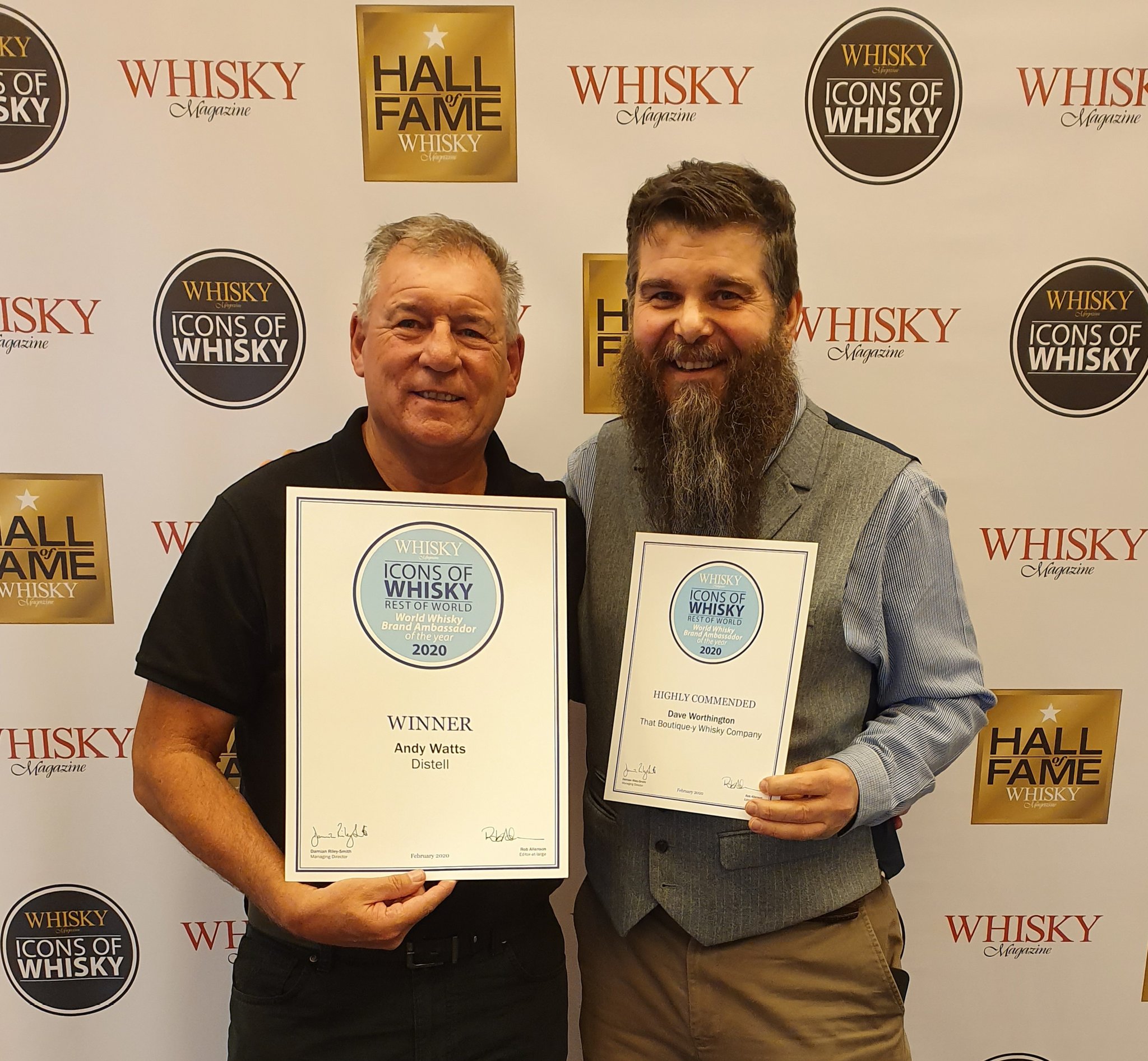 Distell’s Andy Watts with the coveted World Whisky Brand Ambassador of the Year award at the Rest of the World Icons of Whisky Awards in London, United Kingdom. Alongside him is runner-up Dave Worthington of That Boutique-y Whiskey Company in the UK.

Watts is Head of Whisky Intrinsic Excellence at Distell in Stellenbosch, and in a further coup for the company, its James Sedgwick Distillery (JSD) received the Sustainable Distillery of the Year award.

The awards were for the Rest of the World division – excluding Scotland, Ireland and the United States – and featured entries from strong whisky-producing countries such as Japan, Australia and Taiwan.

The overall global awards and grand dinner takes place in London on March 26, where Watts and Distell will go head-to-head with the winners from the three traditional powerhouses of the whisky world.

Distell said the latest award was “testimony to Andy’s passion, deep knowledge and dogged perseverance, and it is this attitude which has helped define his success”.

Watts is no stranger to top honours at the “Oscars” of the whisky industry, having won the Rest of the World Master Distiller / Master Blender award in both 2016 and 2018.

In 2018, he was fêted as the global winner of the Master Distiller / Master Blender award, while his signature creation, Bain’s Cape Mountain Whisky, was named World’s Best Grain Whisky in 2013 and 2018.

This year, Distell, its brands and employees, were nominated in no less than eight separate categories.

Speaking after receiving the latest award, Watts had high praise for the team behind him and said the ambassador award represented “new territory”.

While the 59-year-old is best known for his technical whisky-blending abilities, he said he has spent more and more time outside of South Africa in an ambassadorial role, where “my true passion lies”.

Watts is known in the industry as a distiller who connects easily with consumers, his social media activities evidence of his delightful and engaging manner with whisky samplers.

The James Sedgwick Distillery (JSD) received the Sustainable Distillery of the Year award at the Rest of the World Icons of Whisky Awards in London, United Kingdom

“The last three years I have been more busy outside of South Africa, looking to promote Bain’s and make it a little more known on the world stage,” he said of his travels.

The World Whisky Brand Ambassador of the Year award is therefore a real vindication of his efforts at brand promotion and putting Distell and South African whisky on the global map.

English-born Watts, who has been with Distell for 35 years and made Wellington in the Boland his home, admits that South Africans have a peculiar “know-it-all” culture which sometimes acts as a barrier to global success.

According to him, the Icons of Whisky/World Whiskies awards are a “really big deal” in the industry which has seen brands and distillers catapulted into the global consciousness – with resultant commercial success.

“This is really something to shout about…these awards don’t come around every day,” said Watts, who is aiming to leverage the growing honours list into sustained success on the global market.

The James Sedgwick Distillery received the Sustainable Distillery of the Year award – a new awards category added this year – in recognition of the innovative sustainability initiatives being implemented at the distillery. The sustainability award is the second major coup for JSD in recent months after it was awarded the Green Company of the Year by the Business Intelligence Group in November for its exceptional sustainability practices within its supply chain processes.

Watts continues to believe South African whiskies could take their place in every bar around the world, saying the awards were “a golden opportunity for us”.

In March, Watts and JSD will go up against their counterpart winners from Scotland, Ireland and the US for global honours and a chance to truly take South African whisky to the next level and into the minds and hearts of global consumers.